Jonathan Ive, Design Genius or Something Else? 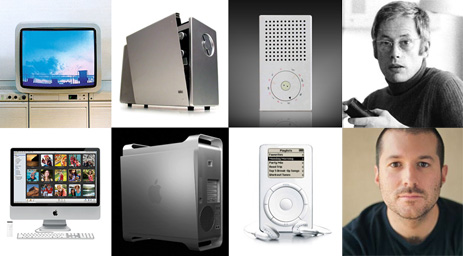 Image Source: Gizmodo
According to Gizmodo there is an uncanny resemblance between the great work of Dieter Rams to the work of Jonathan Ive head of Industrial Design at Apple.

When you look at the Braun products by Dieter Rams—many of them at New York’s MoMA—and compare them to Ive’s work at Apple, you can clearly see the similarities in their philosophies way beyond the sparse use of color, the selection of materials and how the products are shaped around the function with no artificial design, keeping the design “honest.”

Jonathan Ive’s dedication to “honesty” and “simplicity” in design pays great homages to Dieter Rams’ 10 Commandants in Design, and is something that Japanese design great, Naoto Fukasawa, indicated was his major design influence as well. Rams’ 10 Commandants was also recently printed in Wallpaper Magazine’s September 2007 issue, and was something that I wanted to write about but totally forgot! Here they are, in brief as extracted from Wallpaper Magazine:

Dieter Rams 10 Design Commandments
Good Design:
1. is innovative
2. makes a product useful
3. Is aesthetic
4. Helps a product be understood
5. Is unobtrusive
6. Is honest
7. Is durable
8. Is consistent to the last detail
9. Is concerned with environment
10. Is as little design as possible

Anyways check out the complete comparison at the Gizmodo site, some of which are so similar that saying it “was inspired by” is actually pushing it.
Braun T3 pocket radio and Apple iPod

What do you guys think?

Do you think Jonathan Ive is a design genius? Or was he suitably inspired? What about the similarities in design and detailing between Apple and Braun? Are Apple products a result of a close tribute to Dieter Ram’s design thinking? If so what about Naoto Fukasawa, who also follows closely to the teachings of Dieter Rams, but yet his work has a unique character of its own? Shall we discuss?